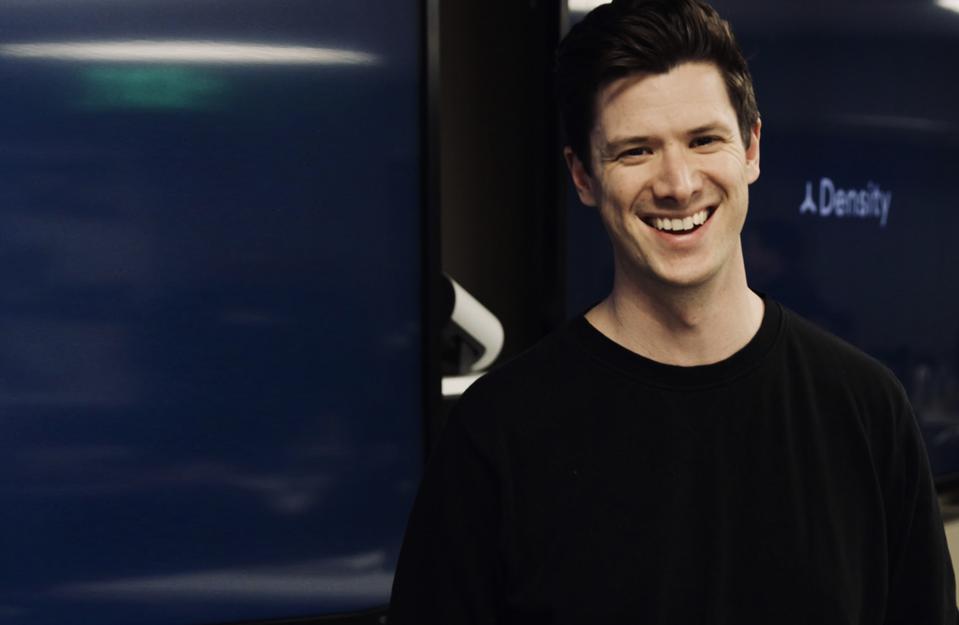 < BACK TO News NEXT STORY >

People-counting company Density, cofounded by six friends in Syracuse in 2014, announced today that it has $51 million in a Series C round. The new funding round was led by Kleiner Perkins and includes 01 Advisors, Upfront Ventures, Founders Fund, Ludlow Ventures, Launch, DTA in participation with Alex Rodriguez, LPC Ventures, Greenoaks Capital, Julia and Kevin Hartz, Cyan and Scott Banister among others.

Density designs and manufactures entry sensors which can be placed across various entrances of buildings, floors and rooms, with the goal of showing how many humans are in any space inside of a building at any time. The company’s technology aims to help organizations eliminate unused space, reduce energy cost, make buildings more secure by eliminating unauthorized access and identifying spaces that are available..

“When we wandered into the present pandemic it narrowed down to two components,” Andrew Farah, cofounder and CEO of Density, says. “Companies trying to keep people safe, and trying to reduce their overall cost to preserve cash in the event of a recession.”

Each sensor is a custom depth sensor with about 800 subcomponents in each unit. The sensors are mounted above the point of entry, and as people walk beneath it it bounces infrared laser light off of objects (people and the things they bring with them), calculating height values for how long it takes for light to return to the sensor.

Density collects the data and measures collisions, bidirectional movements, or lingering, producing occupancy data: plus one, minus one, a number of times across the entire network to provide real time count.

“A large company can own 50 million square feet of space, and 41% of that is typically empty but paid for,” Farah says. “What they can’t decide is which 41%  are empty. We help them understand where there is underutilization and where there is high demand, so they can make better decisions about their space.”

Density charges a one time fee for the sensor which is $895, and then a recurring annual cost per sensor for access to the data which is $795.

The coronavirus pandemic and the need for awareness of the number of people in each room vastly accelerated the demand for Density’s products. In the first quarter of 2020, the company sold more sensors in a 75-day period than it did in all of last year. In 2019, it was growing 40% quarter over quarter in 2019, while in the first quarter of this year it grew 500% compared to the quarter before.

Ilya Fushman, partner at Kleiner Perkins, says that one of the biggest effects the coronavirus has had on the world of business is that it has accelerated the adoption of technologies that were going to become the norm anyway.

“Density has seen an incredible amount of business from companies that are trying to go back to work safely that have large real estate footprints,” Fushman says. “It additionally helps clients understand how to adjust that real estate footprint to the situation post Covid-19 and a really more dynamic future world.”

The company currently has several hundred customers, about 70% of which are large enterprise companies. Some of Density’s clients include Pepsi, Marriott, Uber, ExxonMobil and Verizon.

The company was started by six friends (5 of whom graduated from Syracuse University) in 2014, as their 7th project (previous ideas included things like gesture controlled drones). The cofounders built a prototype trying to count wifi signals from their smartphones in the apartment, when they accidentally measured the number of people in a bar five floors down. Three and a half years later, they had manufactured the first product for wide use.

The San Francisco-based enterprise has offices in New York and Syracuse, counting 50 full-time employees. It had previously raised an $800,000 seed round in 2014, a $4 million Series A in 2016, and a $19 million Series B round in 2018. With the latest $51 million investment, the total amount of equity financing in the company has grown to nearly $75 million.

We use cookies to ensure that we give you the best experience on our website. If you continue to use this site we will assume that you are happy with it.OkPrivacy policy